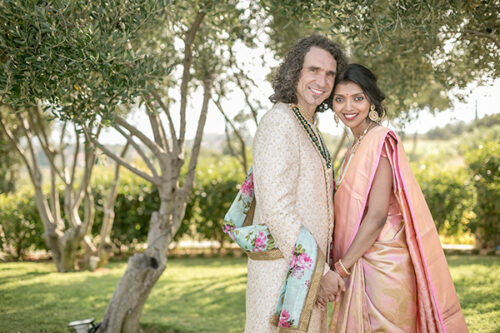 This beautiful Indian wedding is the perfect template on how to beautifully blend two cultures together! Mayuri and Christos said “I do” twice, with an Indian colorful ceremony and a Greek chic ceremony adorned with florals. These two wanted to seal their love in Kefalonia Greece because it was a place where they both never been before and they just fell in love with it. Their wedding was planned and designed beautifully by the talented Kefalonia Weddings. The Indian ceremony was filled with gorgeous, fresh floral designs and details in vivid color tones such as orange, fuchsia and yellow. As for the Greek wedding, the dominant color was white, so both ceremony and reception were adorned with beautiful, white peonies and greenery. Get ready to jump for joy with the sweetest bride and groom as you watch all the happy moments unfold through the following photos captured by Nikiforos Photography!

The bride shared with us: “Christos and I met when I went to attend a lecture in the university he used to teach. It was a sensitive time for both of us as we were going through some difficult moments in our personal lives. However, by talking to each other we discovered a whole new dimension in life. We spent time with each other negotiating many things in our life together for 4 years. During this period several challenges tested us as a couple and we just thrived through them. On a warm September (2018) night in our favorite part of London, Highgate, where Christos and I lived in a small studio flat in the beginning of our relationship, he took me by surprise by proposing outside that door in a rather traditional manner by going on one knee. That place is special to both of us and it was the best place for us to start the next chapter of our life.”

“It wasn’t an easy decision to find the destination. Two things we were absolutely sure about: One, we wanted to get married in Greece and two, we wanted to start this journey at a place where both of us have never been before. Looking through several islands, Kefalonia was found and we just fell in love with it. The lush green trees, balanced with beautiful coastline, beaches, and mountains, it was a no brainer!”

“I found this part extremely confusing, to be honest. I picked white peonies and greens for my bouquet to match the theme of white and green. I just enjoyed the whole process of looking so many flowers and styles. I would happily get married again. (with the same man though!)”

“There were far too many! A moment which stood out for me during the Greek wedding ceremony, taking vows. I was looking at Christos and his eyes welled up with emotions. I will never forget that time. I think I saw infinite love in his eyes in that moment. Another special moment was when after a long day, beautiful wedding we finally got together to sit at the edge of the garden in the olive trees and enjoyed an intimate moment and saying cheers to the beginning of our married life.”

“The wedding decoration had two section Hindu and Greek. Donna from Kefalonia Weddings was lovely and sent us some ideas whenever we shared ideas with her. Her team was open and creative. I chose colorful flowers decorations and bought a few sarees from London, Indian market to use as a backdrop décor. Donna’s team worked swiftly in putting it up on the day. Everyone was so impressed how well they used the sarees. My mum brought some Indian decorations from India too. For Greek ceremony we chose a lovely arch with hanging glass bulbs and drape. The flowers were white and green keeping it light. We chose for lighting in the olive trees and candles on the table.”

“I tried only two wedding dress stores in London. I knew what I didn’t want but wasn’t sure what I wanted. At the lovely little store in Richmond, London, I went with my best friend and tried a few dresses. I found my ultimate dress, sleek, elegant and as they all said very Grecian. BOA bridal boutique. I chose an Alma Novia, Remur gown. It was beautiful and floating with the wind that evening. I particularly loved the back details with delicate lace covering the back.”

“I do wish I had found Chic and Stylish before my wedding, but it is lovely to share our day with you now.”

“Whilst I like to think about details, I would say don’t get lost in too many details but enjoy the process of planning the moments in your wedding. On the day, forget about everything and just enjoy, take a moment to see what you and your husband managed to create. I remember, this moment at the reception, Christos and I just took a moment to look around and saw that the magic of bringing people whom you love together had come true and it just felt perfect!”